My friend’s daughter was staying the weekend with me, and since there are a few horror movies in the theater right now (with more to come in preparation for Halloween—whee, I love this time of year!), we decided to do a horror movie weekend. First up was House at the End of the Street, and my fifteen-year-old charge met me at the Park Slope Pavilion, our favorite shabby-chic theater, with her friend. We fed a friend’s cat that I’m cat sitting (the Halloween-colored Bellatrix), and then went to have a little Thai food, where we told each other ghost stories before the movie. Valerie’s friend lives in a house in Brooklyn that’s been in her family for generations and a few family members have actually died there, so there have been some sightings of great-grandma and others.

Once we were properly in the mood and with twelve minutes to spare, we ran to the theater and got our seats just in time for the movie. It took me a little while to get into House at the End of the Street. There’s a murder where a husband and wife are taken out by their daughter, which frees up the glorious house next door for Elissa (Jennifer Lawrence) and her mother (Elisabeth Shue) to move into. I really liked the casting for the mother-daughter pair—I don’t think I’ve been this happy about a casting decision since Teri Garr was cast as Phoebe’s mother on Friends—but I wish there had been more depth to their characters.

Mother and daughter have been led to believe that the house where the murders happened is abandoned, but they soon learn otherwise at a neighborhood barbecue where everybody bitches about the long-lost son, who has returned to fix up the house and resell it, because he’s driving down the value of their homes. Of course, this is the reason that Elissa and her mother are able to live in their house in the first place, so they can’t complain.

Elissa’s introduced to the perfect neighborhood boy, but later at school when he invites her to a social gathering, she finds out he’s a brat and flees. Elissa is picked up by the next-door neighbor, the son of the murdered parents who everybody else hates, and after that meeting the two form a friendship.

The best thing about House at the End of the Street is Jennifer Lawrence as Elissa. It was satisfying to sit in the movie theater next to two teenage girls and see a worthy role model on-screen for them. Elissa plays guitar and sings, and when slimy kids come on to her or tease her, she doesn’t cave into peer pressure and sometimes even fights back with her fists. Stranded on a dark road with a menacing car passing by, she pulls out her cell phone and dials, being a smart girl. Later in the story, horror movie clichés dumb down her character, but Lawrence still comes off as steely. And at this point in her career, I wouldn’t expect anything less. After playing Ree in Winter’s Bone, Mystique in X-Men, and Katniss in The Hunger Games, Jennifer Lawrence is always going to be the epitome of tough girl for me. 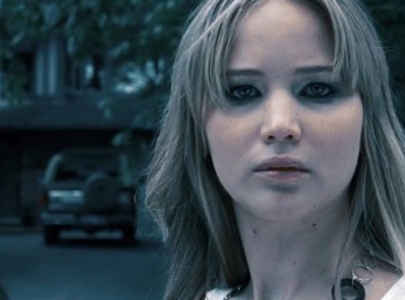 There’s a good twist in the movie that I didn’t see coming, but the ending turns into one of those long, drawn-out climaxes that I’ve seen repeated quite a few times. I’m confident the main character won’t be killed, so I’m just sitting there, feeling ho-hum, until everybody calms down and the enemy is vanquished. The best part of these average horror movies is when the audience’s reactions are out of proportion to what’s on-screen. I think the screaming, the comments of “No, don’t do that; don’t go down there,” and being in a dark movie theater while this is going on makes viewing the movie a richer experience. The audience is always a crucial factor for me when going to see a horror movie.

After the movie, the two girls talked about how they liked it but weren’t really scared, and we climbed on the bus to go home. We sent Valerie’s friend home with instructions to call when she got there so we would know that she hadn’t been chloroformed and kidnapped, and then Valerie and I walked home, talking about important things, like how would you react in a life-or-death situation? Would you be able to do what needs to be done or would you shut down, whimper and curl into a ball, waiting for the murderer to get you? We made fun of the girl going down into the dark, creepy basement, but Valerie said she realized that it had to be done to advance the plot. Maybe this next generation of horror writers will be able to find a more creative way to get the protagonist into the basement or change the location of where the horror is hidden altogether.