I’ve used my shrine to help me focus in later years during twists and turns of my life: moving, new job situations, death, and writing. I’ve accumulated many objects that litter the top, and I’m constantly shifting things on and off of it. Permanent things include coins, especially those leftover from traveling overseas; railroad spikes that my sister found; a rusty nail; a metronome that my mother picked up at a garage sale; the ashes of my first cat Venus, who lived to be twenty years old; and one-half of a set of ceramic hands that I like to prop against Venus’s tin so she receives pets into perpetuity. Most of the objects on my shrine have been given to me, and I think that makes them more powerful and loaded with magic.

For the last couple of years a green wooden birdcage that my mother gave me has been taking up prime real estate on my shrine, and I was slowly trying to fill it with a thousand origami cranes. I did this before in Austin when I was getting ready to move to New York. I found an old rusty birdcage at a thrift shop in Texas, and in the months leading up to my move, I folded origami until my fingers got sore. After that move, the cranes were set free by Valerie, when she was about three and didn’t want to take a nap; she sailed them out our attic window one at a time. I was trying to re-create this powerful surge that came from the move, its momentum, by folding another thousand cranes, but the shrine does not want repeats. It wants something bigger and better than the last performance, and it let me know. 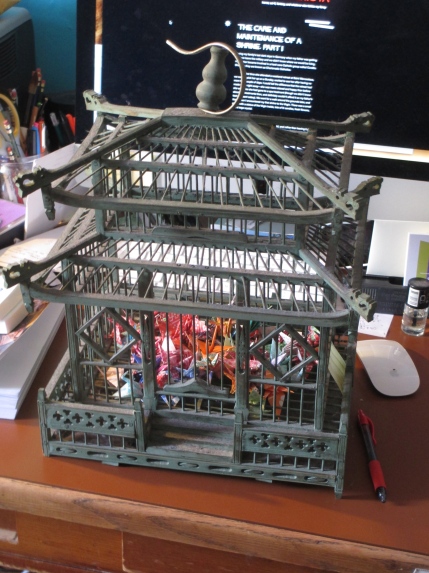 With spring coming this April, I was noticing an uptick in my energy levels, and I put the changes off on the different seasons, April being my special birthday month, etc., etc. I was having bouts of insomnia and had one night where the ticking of the clock was driving me crazy. For years, I’ve been using an IKEA alarm clock that I bought for $1.99—one of the best investments I have ever made—but its ticking never bothered me before. Sometimes I actually have to hold the clock up to my ear in order to make sure that it’s working. Eventually I was able to get to sleep, but the next night the same thing happened. I felt like the narrator of Edgar Allan Poe’s “The Tell-Tale Heart,” who’s slowly being driven mad by what he thinks is a dead man’s beating heart.

I got up from my bed and discovered that the ticking was coming from a different direction than where I had placed my IKEA alarm clock. It came from my shrine. I turned on my light and located the source of the ticking—a Virgin of Guadalupe clock that had been on my shrine for almost five years. When Sarah and I visited our friend Flannery in San Francisco back in 2008, we found the Virgin of Guadalupe clocks in some store and each bought one. I put a battery in the clock when I returned home and propped it up on the shrine, but eventually the battery died and I never replaced it, having much more reliable clocks. Somehow it had recharged itself after four years.

I’m a big believer in signs, and shortly after this, I came up with a mantra involving transformation, and kept saying it to myself over and over again, waiting and thinking. My birthday came the last day of April and my sister gave me all shrine-themed presents: peacock feathers to help with the all-seeing eye, a Virgin horseshoe for luck, and a grim reaper in the shape of the Virgin of Guadalupe because I had Death as the final outcome in a tarot reading—not a card of literal death, but one symbolizing change and transformation. A friend gave me a few gifts wrapped in butterfly-printed paper, and I carefully saved the wrap, something I almost never do.

About a week ago, I finally realized what I needed to do and took that saved paper and cut out all the caterpillars and butterflies, with a lot of help from Kristi. (She can do some mean scissors work and was actually able to cut out two butterflies’ antennae, which I had given up on.) She also has shelves full of art supplies and gave me a bottle of shellac, with directions that promised a nice, shiny coat after two applications and three hours’ drying time between each.

I cleared everything off the shrine and cleaned the top of it really well. Sarah had sent me some very potent dried sage that she picked by hand off a reservation in South Dakota, which has special associations for me, since my family was stationed there for two years and my sister Karla and brother Randall were born there. I put a little pile in a seashell and burned it to spiritually cleanse the shrine, and then I spent an afternoon turning a boxful of butterflies and caterpillars into this decoupage surface.

I added gold antennae to the butterflies missing them, and then I wrote my mantra around the corners of the tabletop, signing it Aunt Kathi and drawing an ant. I think the shrine is happy now and has decided that it wants to go to my niece Phaedra next.