I’m a nervous flier, but this condition came on slowly during my life. I remember liking to fly when I was a kid. I’d get all sorts of privileges like having my stuffed bear ride in the seat next to me, little plastic wings affixed to my shirt or dress, and unlimited soda. We flew frequently when my father was in the military, but when he got out during my teen years, I didn’t fly for about ten years.

Instead of gradually building up my flying skills after that amount of no-fly time, I found myself facing an eight-hour-long international flight to Italy on my first trip there. Suddenly I was petrified and envisioned all sorts of crash scenarios. I made it onto the plane and sat in a ball of fear for about an hour, but it was too hard to sustain that kind of tension and I gradually relaxed. After that trip, I found myself flying about once a year, and though it wasn’t my favorite thing to do, I made it through. I don’t particularly like flying, but I do like to travel, so something had to give. 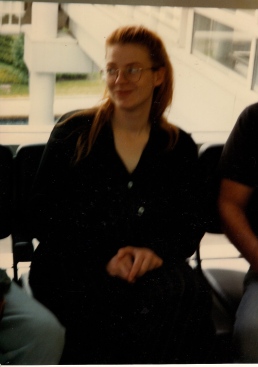 Me scared to death before my first flight after ten years of not flying.

Then 9/11 happened, and instead of a little nervousness, I started experiencing full-blown panic attacks. Part of the problem, I think, is the amped-up security. It seems like every time I fly, a new safety procedure has been instituted and each one of these precautions reminds me of all the dangers today’s travelers face. Shoes have to come off because of shoe bombs, liquids have to be minuscule and separated out to make sure they’re not the makings for bombs, and now there’s a full-body X-ray to make sure we’re not stuffing bombs up our orifices.

For several years after 9/11, I was terrified to fly. Being stuck in that circular tube full of people (often uncomfortably full) and recycled air was my idea of torture, but my family was far-flung, as well as the other places that I wanted to travel to. Once I took Amtrak from New York to Chicago, and the twenty-three-hour trip was hell for the last eight hours. I kept a detailed hour-by-hour log of the trip, and by the end I was a raving lunatic. It also took me a day to uncurl my body from the sitting position I had been in for so long during my train travels, which took precious time from my vacation schedule. I decided never again after that. I was going to have to get used to flying again.

A couple things did really help me with my phobias. A friend of mine went to school and trained as an airline pilot, and when I told her about my flight phobias, she broke down what happens in a crash and how to survive it if at all possible. First off, she said, always try to get a seat ahead of the wings. The gas tanks are below the wings and that’s where the fire will erupt during a crash, flowing backward and flash-frying everybody in back of the tanks. Check—I always do that now. Second, she said to always know where your exits are and to physically count how many rows you are from the exits. If the plane crashes, there will be so much smoke that it will be hard to see and the emergency lighting might fail. I now do this immediately after sitting down. It’s funny how preparing for the absolute worst can make somebody feel better, but sometimes it works out that way.

Sherman Alexie is another nervous flier, and his tactic is to watch the flight staff since they’re the ones who will know first if something’s up. He said that the minute they’re up from their seats, he knows everything’s all right, and he keeps a close eye on them throughout the flight to gauge how the plane is doing.

I’ve had a prescription for Xanax in the past, but when I take one of those pills, I feel like a zombie for the rest of the day or longer, which can eat up too much time in a packed vacation schedule. Now, I’m doing my traveling with a bottle of Bach Rescue Remedy. I like its cheerful yellow label, and I do actually feel a little mellower after I dose myself with a few drops. I don’t care if it’s a placebo as long as I’m not spinning into the stratosphere, so panicky and anxious that I feel like I’m going to flip dimensions.

My sister, who’s not a nervous flier, after we were bumped up to first class. Notice the pin that she asked for.

I wonder, though, if it will help after my last flying experience. I visited my family in Iowa a few days ago, and the flights there were no problem. I had that familiar panicky sensation in the pit of my stomach on the way back, though. I passed through security with no problem in Moline. The staff there was professional and cheerful, getting me through security with little agitation. The plane between Moline and Chicago is tiny with a single row of seats on one side and two-seaters on the other side. I was just grateful it wasn’t a propeller plane. We took off with no problem, and that’s always something I carefully watch. My pilot friend told me that’s when the majority of accidents happen—during takeoffs and landings.

It was meant to be a short flight—only thirty minutes. As we made our descent and were within kissing distance of the trees—a point when I’m always convinced we’re safe—instead of feeling the ka-thud of wheels hitting the tarmac and the sudden braking as the plane slowed down, I noticed that we were ascending again. I looked around puzzled at other passengers, and the man near me, who had been regaling a college student about his business trip to China during the flight, said, “I’ve never seen anything like this before.”

I couldn’t see the flight attendant in her jump seat from where I was sitting and was unable to read the expression on her face. Once we were fully in the air and wheeling around Chicago, the pilot came on and informed us that there had been a plane in front of ours, but there wasn’t enough room on the runway to land. This was all relayed in a very conversational and friendly manner, like I was chatting with somebody at a bar. Then he signed off with “Peace,” and I felt like my life was in the hands of some surfer dude, not the coolheaded professional that I wanted to envision my pilot being.

I tried googling what I thought was a near accident when I got home, but the last time something serious enough to warrant the news happened at O’Hare was in May. Apparently, this running out of runway must happen more often than I think, which will now give me something else to worry about with my flight phobia.