To celebrate the Fourth of July, I got a jump on the holiday by watching Captain America. Somehow, I missed this one in theaters last year. I’ve been working on some U.S. history materials the last few years, and what I find most incredible is the history that I never knew, that’s never been taught. This stuff wasn’t in the social studies books that I grudgingly read or I would have been such a fan—the best U.S. history student that you ever saw.

In the deep fact-checking files that students don’t see, I learned about how early presidential inaugurations were free-for-alls, where the public came to the White House to drink and destroy it like a frat house—only to be lured out by tubs full of sour mash whiskey. And then last week, I read about how a senator was caned until he fell unconscious (and took three years to recover from his beating) because he didn’t agree with adding more slave slates during the western expansion of the United States. These are the things that are dusted over and sanitized in social studies textbooks, and now I know that I was taught a very edited view of U.S. history. Still, I wasn’t prepared for the liberties that Captain America took. I felt a little twinge while watching the movie, thinking, That’s not how it went! But the idea of an American hero won out in the end, and I rolled with it.

Now, Captain America did highlight some all-American things. There’s the nighty-eight-pound weakling with sand kicked in his face who then becomes big and strong—those ads were still running in comic books when I read them alongside the ones for X-ray vision glasses. And then when Captain America gains his powers, there’s the gimmickry and massive advertising campaign that the U.S. military concocts. There’s nothing more American than advertising. Poor Captain America gets tricked out in tights with pitiful Capricorn ears sewn to his face mask (I know they’re supposed to be wings, but they looked like little deflated horns to me) and is backed up by chorus girls in high heels because sex sells.

Alongside this Americana is the America that I don’t recognize, where a woman runs special operations and stamps out sexism immediately with one swing of her fist. Then later, Captain America liberates a U.S. Army unit that includes a token African American and Japanese American and no racism. Last time I checked the military was segregated during World War II and Japanese Americans had been forced to internment camps. I don’t know, perhaps where Captain America chooses to walk, a utopian, rarefied universe rises up to greet him. 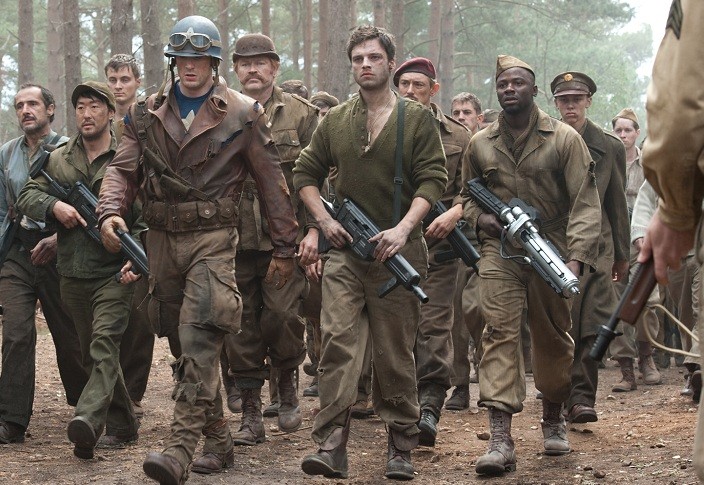 I wasn’t particularly bothered by this revision of history, and it put me in mind of the Grey’s Anatomy series when it first began and I liked it enormously. It wasn’t until the series had been running for a few months that the show’s creator came forward and said she intentionally gave the hospital’s top staff positions to African Americans. I had never even considered or puzzled over this when watching the show; I just knew that I liked it. After reading about these intentional decisions, I wanted to see more of this reflected in television and movies. Why not create the world we want to live in and see if it follows in real life?

I’m not sure how I feel about this applied to U.S. history, though. I remember that quote from George Santayana—“those who cannot remember the past are condemned to repeat it”—and I sure as hell don’t want to have to go through slavery, World War II, Rwanda and machetes, and other atrocities that just seem too mean to believe.