Being a Shining fan—of both the book and the movie—I was curious to see Room 237, the documentary about the many theories spawned by Stanley Kubrick’s movie. I’ve seen Kubrick’s version of The Shining more than five times—maybe even more than that—and never read too much into it. I always thought it was a damn fine movie, and I particularly liked the device of Danny’s index finger being his imaginary friend Tony (sometimes simpler is scarier) and Scatman Crothers’s performance as Dick Hallorann. After seeing the movie, I can never imagine anybody else as that character.

I’d been waiting a couple of weeks to see the movie and was grateful that the IFC Center was still showing it. After buying my ticket and entering the theater, I was thrilled to recognize it as the one where I saw Ron Perlman in The Last Winter several years before, and I remembered a nice red-and-black bathroom tucked away in the basement. I never made it down there, though, sidetracked by a display of T-shirts that at first glance appeared to be logos of heavy metal bands. Looking closer, though, the names were of arty directors in the style of heavy metal bands—there was Fassbinder, Herzog, and my personal favorite, Carpenter. I’m not sure about the trademark issues for this, but it’s a fun idea.

We went upstairs to a theater that I hadn’t been in before and waited…and waited…and waited for it to open. After being seated in the lobby for more than twenty minutes, the crowd had grown large and people actually formed a line to get into the movie theater. Reluctantly we joined them, but it didn’t make a difference as to better seating choice. The theater was full of overstuffed purple-and-white seats that were all sprung, and my chair felt like my father’s broken-down La-Z-Boy. My friends and I got four seats together, and all felt the same way about the chairs. Such a shame, it’s getting harder and harder to find a good, comfortable theater in New York.

Smart-people shorts were shown before the movie—one about politics and another about how Iraqi citizens who had risked their lives to help the U.S. armed forces during the war were now not being allowed promised refuge in the United States (as a result of their help, they were being assassinated by enemies). A woman came in late during these shorts and took the aisle seat next to our group—I knew we should have shifted over one more to close the gap. She had the smallest bag of popcorn in the world, and I didn’t think anything of it, except That should go rather quick.

The documentary Room 237 starts out strong with one man’s theory about what the Calumet baking powder means in a few scenes of The Shining, where the cans are prominently displayed. The theorists’ faces are never shown. Instead, the movie’s visuals are clips from the The Shining that have been slowed down to a crawl so each and every detail of a scene can be analyzed; some behind-the-scenes footage and stills of the movie are also shown. This part I really enjoyed, as I could appreciate how much really goes into building a scene. It was mesmerizing to see Jack Nicholson psyching himself up for his famous ax-wielding scene off camera and almost whacking one of the film crew in the head, and there are so many in-jokes in The Shining that I had never picked up on before because the images fly by so fast. 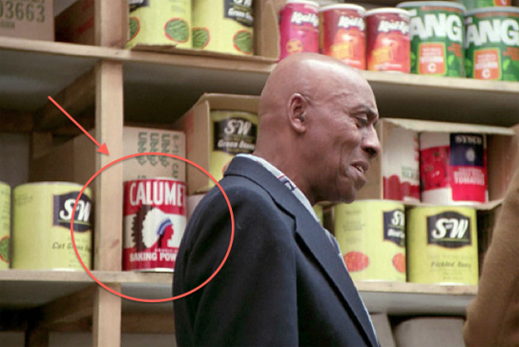 The faceless theorists of Room 237 started to get on my nerves, though. A speaker starts out with a theory on the movie—some are very strong and hold up—but then after you’ve started down the path with them, quite a few veer off into Crazytown. It reminded me of being in a bar, where you meet somebody for the first time and think, Wow, this guy seems really nice and smart, but then the conversation takes a turn and you realize the person is batshit crazy. The problem becomes how do you extricate yourself from this conversation?

With Room 237, I had paid $13 to be part of these conversations, so I was damned if I was walking out. I tried to tune out the annoying theorists, but then I ended up picking up on the peccadilloes of audience members around me. Like the woman with the smallest bag of popcorn in the world, which she made last for forty-five minutes by eating it kernel by kernel, all noisy, openmouthed chewing. After that, she took out her iPhone and made Facebook status updates before leaving, bored. Not to worry, a guy behind us started up being annoying once she left, with big, rumbling snores.

I think my threshold was very low because the theorists were annoying me, and I didn’t feel like I could trust any of them, and that in turn dialed up the annoying quirks that I can usually tune out.