It Follows reminded me very much of ’80s horror movies, from the neon colors to the soundtrack that sounded eerily like Tangerine Dream. I think what I saw referenced most often was Wes Craven’s Nightmare on Elm Street series, where teenagers are menaced by Freddy Krueger, the boogeyman in their dreams. It Follows opens with a damsel in distress running down the street in just a T-shirt and high heels, obviously post-coitus, trying to escape from an unknown something. She’s shown being menaced, leaving a voicemail for her dad, and then the next shot shows her in the daytime ripped to pieces. Right away it seems that the beautiful people are under attack in It Follows with ladies first.

Jay, the main character of the movie, is played by Maika Monroe, who spends a lot of time running around in underwear or swimsuits. When a person’s almost naked, they’re at their most vulnerable, and that’s what this movie plays on, the sexploitation of young women and what they can do with it. Jay is close with her sister Kelly and a group of neighborhood friends: Yara, the brainy one, who’s gaining great insight from Dostoyevsky’s The Idiot, which she reads throughout most of the movie, and Paul, the sisters’ guy friend who kissed them both when they were younger and still pines for Jay.

The sisters live a simple life in a suburban home, with Jay attending college classes and her younger sister working at an ice cream store. In the backyard is an aboveground pool with five-foot-tall blue plastic walls, what I’ve always seen as a symbol of lower middle class striving for something better. Jay loves the pool, to the delight of the neighborhood boys who are in lust for this dream girl, and many of the shots in the movie are from Jay’s point of view there while looking up into the open sky crabbed with a few tree branches.

She goes on a date with a guy she likes but doesn’t know very well yet. The date starts off normally, but when they go to see a movie that’s where things start to go off-kilter. While playing a game involving the people around them, Hugh, her date, is freaked out that Jay can’t see what’s clear as day to him. He gets so upset by this that they have to leave the movie theater. Later, Jay and Hugh take it to the next level and have backseat car sex and Hugh kidnaps her, bringing Jay to an abandoned parking garage where he schools her on what will happen next in a truly terrifying scene.

Hugh’s got a terrible curse where he sees people that aren’t there—people whom he seems to love mostly—and they’re going to kill him unless he gets rid of “it” by having sex with another person and passing the curse on to them. Traumatized, Jay isn’t sure what he means after she’s returned home, abandoned at her house like a date rape victim. An STD? But soon after she starts seeing people who aren’t there, such as an old woman with knee and ankle braces who stalks her through her school, a figure that only Jay can see and react to while her behavior strikes others as that of a crazy person. This reminded me again of some of the Nightmare on Elm Street movies, when characters are locked in a nightmare but nobody else can see what they are battling, just their bizarre actions. There’s even a Johnny Depp lookalike, Greg (played by Daniel Zovatto), whose family looks down on Jay’s, similar to the first installment of the Nightmare on Elm Street series.

The movie’s scares come from not knowing who is after the infected. Sometimes a person is there and everybody can see them, or it morphs into one of the group of friends and it’s hard to tell the real apart from the threatening.

I like that the movie plays with the trope of virgins being the survivors in a horror movie, while those who have sex are goners. I think I first saw this exploited in another Wes Craven film, Scream, which had those candy colors in it as well. In It Follows, the virgins are safe unless they get caught in the crossfire of the sexually active who are duking it out with the menacing spirits out to get them.

The premise gets muddy, though, and I found myself puzzling about how the curse works during the last part of the movie rather than watching it. Hugh, the last victim who infects Jay, says that there is a chain that can’t be broken or he’ll be gone, too, but the origin is never revealed. There’s no Krueger or Samara of the Ring series to explain the how and why of the curse. It’s also hard to believe that young adults are going to explain the rules of the sex curse to their hookups when they don’t really know them, either. But maybe that’s playing on certain sexual myths that I’ve heard directly from guys’ mouths in the past, like you can’t pregnant when you’re having your period or a woman’s fertility shuts down when she’s raped. 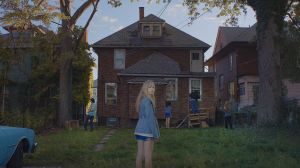 Not knowing where the curse is coming from just left me with a lot of questions, and then some of the original “rules” are broken. I like that the women in horror cliché is turned upside-down and the ladies in their skimpy outfits actually hold the position of real power in the story. As the lovely Jay is told by her infector, “It should be easy for you. You’re a girl.” But I still want to know the how’s and why’s of the curse, even if this is a horror movie where not everything has to make sense.

I’ve already looked up the plotline of Dostoyevsky’s The Idiot on Wikipedia to see if there’s a clue there, since Yara’s reading it obsessively on her clamshell e-reader and quotes from it, but that didn’t help. And I don’t have room on my reading list to fit that book in, especially if it’s not going to help me solve the mystery of the curse. I always swore I was saving the heavy-duty Russian authors for when I was near death.