Lauren Beukes was born in South Africa and says, “I’m a South African writer who is incredibly lucky to get paid to make up stories all day. It wasn’t always like this. Over the last fifteen years, I’ve been a journalist, a TV scriptwriter, a documentary maker, and a mom to a small and amazing daughter—and had to find time to writer novels in between.”

Beukes’s big break came with her YA horror novel The Shining Girls published in 2013, which went on to win several awards. The book is now in development with Leonardo DiCaprio’s production company Appian Ways with plans to adapt it into a TV series.

The Shining Girls began as a tweet when Beukes was avoiding her work. She says, “This is a little embarrassing. I was messing around on Twitter instead of writing (as you do) and threw out the idea in the middle of a random conversation. I immediately deleted the tweet because I was like, Yes! That must be my next book! Quickly! Before someone else thinks of it! But I think that’s often the way of interesting ideas—they come around when you’ve let your subconscious off the leash to romp in the grass.”

Taking a cue from police procedurals, Beukes created a large “murder wall” in order to track the movements of her time-traveling serial killer character in The Shining Girls. “It’s full of crazy pictures, three different timelines, murder dates…It’s been completely insane trying to keep track of all of this.”

Though the novel took a fantastic amount of research, Beukes says, “I wanted to use time travel as a way of exploring how much has changed (or depressingly stayed the same) over the course of the twentieth century, especially for women, and subvert the serial killer genre by keeping the focus much more on the victims and examining what real violence is and what it does to us. The killer has a type, but it’s not a physical thing—he goes for women with fire in their guts, who kick back against the conventions of their time.”

For her follow-up horror novel Broken Monsters, set in Detroit, Beukes stayed in the serial killer genre, but she decided to root the story in the present, using lots of pop culture and social media references. Beukes interviewed teenagers in Detroit about how they used social media and found that “your social media identity is something that is very carefully curated. And it’s not necessarily real life, the real-life Detroit teenagers that I interviewed, we talked about the idea of Shakespeare and all the world’s a stage, and I was like, ‘Well, what’s the stage? Is the stage social media or is it your real life?’ And they were like ‘No, no, social media is the stage where you present this idea of yourself. And real life is what happens in the wings.’ And that’s the rehearsal. That was very interesting, that these kids were living their lives so absolutely on social media.”

Being a stickler for details, Beukes went to the Detroit police station, hoping to find an old precinct with character. What she found instead was something shiny and new and felt it necessary to represent modern Detroit accurately. “I went to visit Detroit Homicide with a box of doughnuts and it’s a brand swanky new building,” says Beukes. “Everyone has computers, they have their own gym with TVs and this sort of thing. I was like, Are you kidding? It looks like a fucking Dilbert cartoon! And I’m like, ‘No, no I don’t want this!’…I could have said, ‘Oh, we’re in the police station and it’s so fucked up and there’s stains on the floor and there’s this creepy interrogation room and there’s broken glass…,’ but that’s not the reality and I did feel a moral responsibility not to misrepresent Detroit like that.”

Growing up in South Africa, Beukes witnessed the horrors of apartheid and that has made it into her work. “There are a lot of social issues that leak through my novels. It comes from having grown up under a terrible repressive racist regime and ten years as a journalist, getting backstage in the world,” she says.

Beukes says her dark, morbid ideas come from a strange place in her mind. “There’s this crazy insane hoarder room in the back of my mind, all kinds of weird stuff I’ve kept back,” she says. “Actually, it’s more like a mad science experiment, with all sorts of horrible mutations.”

Now Beukes is hard at work penning an original horror comic with writer Dale Halvorsen (aka Joey Hi-Fi) called Survivors’ Club, which is being published by Vertigo. It’s based on children from the 1980s who have lived through scenarios from various horror movies, such as surviving a killer doll, being possessed by a poltergeist, etc.

Beukes felt this story would do better as a comic with big visuals rather than with prose. “The concept is very visual. Comics just felt right, although it is much harder juggling a large cast in a comic book. It’s like a horror super team, all with their own dark secrets and terrifying backstories and little reason to trust each other, so we’re dealing with the over-arcing mystery, the immediate mystery, and all their backstories,” says Beukes. 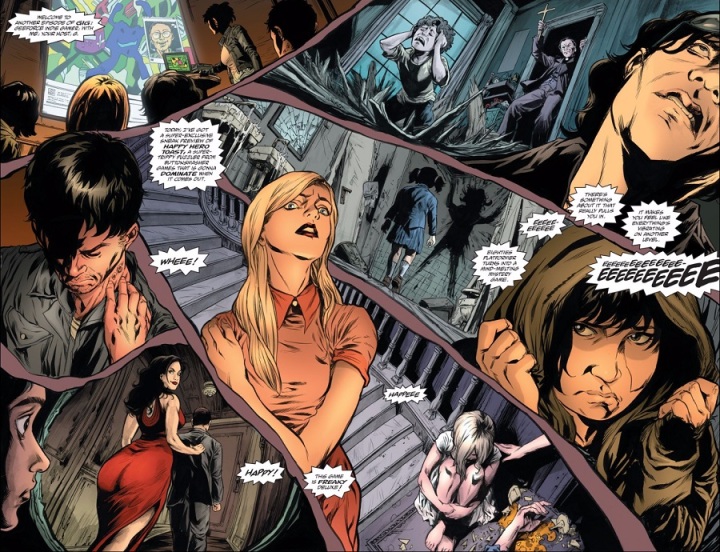 Her horror novels have taken place in the United States with American characters, but in Survivors’ Club, Beukes introduces a South African character, Chenzira. “She grew up under the extreme oppressive racism of the apartheid government and her mom, a freedom fighter, was killed in police custody. As a kid, playing video games at the local arcade in Soweto became her escape from the monstrous society around her, but then the game she played opened a doorway to allow real monsters through,” says Beukes. “A running theme in my work is how we’re haunted by the past, how those monsters come back to bite you, and Chenzira is very aware of that because of her personal and political and supernatural experiences. It’s made her keenly focused and driven to confront her demons head-on, which is why she called the other survivors together.”

The Shining Girls by Lauren Beukes