I’ve always been able to draw well. My mom likes to tell about how my very first stick figures would have eyelashes, fingers, and fingernails unlike the other kids’ drawings in preschool. In my junior high and high school classes, the most life drawing I would get to do was pastels of still lifes or maybe portraits of classmates. At home, I ended up drawing my family, my shoes, and other things that were right in front of me. To me, real life drawing, or studies of the nude body, was very serious business reserved for classical artists.

Then I went to college and studied art with a concentration in drawing and printmaking. The backbone for that degree was life drawing, which was almost exclusively drawing from the nude figure. I started with the required class Basic Drawing, and I still remember my teacher Richard Merritt, a funny guy who made me laugh a lot, telling us that we would be having our very first nude model in class. The days and hours ticked by slowly until that day; I was as nervous as I would be if I were giving a speech. We were going to draw somebody naked. I had no idea if the model was going to be a woman or a man, but I hoped it would be a woman. I thought it would be easier for me since I had the same parts.

The day came, and the model was indeed a woman, a model who I would end up drawing often during my college career. I was relieved when it ended up being no sweat. The model was completely professional, wearing a robe between breaks and reading a book. When she posed, all attention was on her, not on me, and it was work as the class tried to get the pose down; it was not an erotic experience. Later, I had sessions with models who were not nearly as professional, who would walk around naked during breaks, looking at the drawings of themselves with a smile of pride on their faces. Me and other classmates would just try and pretend that they weren’t there. We were used to the model just sitting there and looking pretty, not interacting with us.

When I told my roommates and friends about my life drawing experience, a couple decided that they wanted to model, and all of a sudden, I found my shy ass being the modeling connection between them and my teacher Richard Merritt. He was the perfect person to introduce me to life drawing because he seemed to have no hang-ups and would tell us anything. I think the most valuable lesson he taught us was not to drink, drug, and draw. He told us about a night of heavy drinking or dropping acid or something like that and going to his studio to paint. He woke up the next day convinced he had painted a masterpiece, but when he got back to his studio, the canvas that awaited him was of a smiling tooth. 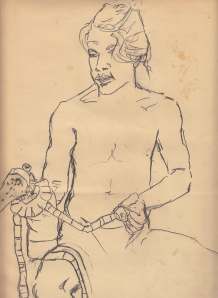 Drawing from my college days

I had a real fear of drawing penises when I first started life drawing, so I would always sketch those in last, hoping time would run out on the pose before I got to that point, and if it didn’t, then I would try to do some clever shading. Anything to avoid having to draw that. One of my class’s first life drawing lessons was contour drawing with a twist. We were to draw the model without looking at him. Yes, this time the model was male, and he did a standing profile pose with hands on hips and everything on display.

A sheet of paper covered my hand so I couldn’t see what I was doing, but I dutifully traced what I saw as the line of the body. When I got to the penis part of the model’s body, I tried to gloss over that as quickly as possible. Because we couldn’t see what we were drawing, our teacher thought it would be funny to reveal our drawings and let everybody see what we had done. I flipped over the covering sheet and didn’t look at my drawing before launching off to see my classmates’ because I just knew it would be an incoherent mess.

I circled the room looking at everybody’s drawings, and they weren’t half bad. I could recognize the figure in most of them and even a few of the model’s distinguishing characteristics in some. I got near the end of our horseshoe of desks and saw most of my classmates grouped around a desk giggling over something. Then I realized it was my desk. I edged in and really looked at my drawing for the first time. The model was totally recognizable. His head, torso, arms, and legs were proportioned pretty well, and I had actually done a reasonable job of drawing his curly brown hair. It was his penis that was drawn completely out of proportion. I had drawn it in such a fashion that it jutted out of his body like a third leg.

After that, I realized that thinking about something too much was overkill. George Balanchine’s advice to dancers applies here: “Don’t think, just do.” It was best to just tackle each part, each line, each angle as it came and to trust that the drawing would come together in the end. It usually did.

Life drawing always followed a certain formula. We would start out with very quick gestures that lasted for about one to three minutes, where the goal was to capture the entire figure. From there we would progress to ten- to twenty-minute poses and then to a final pose that might last as long as an hour. I always liked gestures the best. The thick, smudgy lines, the whip of pages and paper being turned—just letting drawings rip out of me put me into a nice groove. I did all right with the ten- to twenty-minute poses, trying to develop the face of the model more to get his or her likeness right, but I would get downright bored for hour-long poses, drawing in the walls, ceiling, lights, and whatever else was around the model because I was sick of futzing around with shadows, trying to get a muscle or dent to pop out right.

The longer the pose became, the more the poses would degrade, too. With one- to three-minute poses, there would be lots of action and standing, flexed arms and legs, thrown-back heads and shoulders. When the model had to keep a pose for more than ten minutes, though, he or she would almost inevitably stretch out their robe and recline, not a very exciting thing to draw.

A Different Kind of Beauty

After college, I took more life drawing classes wherever I happened to be living, and that formula was never broken. I found classes to be necessary thing for me. There’s something about life drawing that soothes my soul and makes me feel more hopeful about humanity. After spending a few hours drawing the human body and seeing all the potential and movement available to it, I go out on the street, and I see beauty in everybody and everything, but not the kind of beauty you might think.

With the artists I have worked with, the idea of a beautiful model was not exciting (drawing conventional beauty is quite boring really), but how a class would hum if we scored an unconventional model. At the Art Students League, where Madonna used to work as a nude model before she hit it big, there was an obese older model with long red hair who traveled from class to class with a suitcase full of props. There was real excitement when she came to pose, and students would get out their best supplies and paper, up for the challenge of rendering slabs of fat on paper. To us, this was far more interesting subject matter. A scar, wrinkles, and fat were much more fun to draw than flawless, youthful beauty. Whenever I leave life drawing, it is the odd beauty I see in front of me that I want to draw—the hooked noses, the disheveled homeless, and people’s fleshy chins.

I’ve gone from figure drawing at the Art Students League to life drawing at the Productive now, a session that’s aimed toward animators and specializes in the quick gesture poses and drawings that I like so much. This is a humbler crew than at the Art Students League, who work with whatever’s available—printer paper, mechanical pencils, ball-point pens—and there’s always a social gathering afterward at a bar or restaurant, where we talk about how our drawings and the poses went. I’m always blown away by how transformed and energized I feel after a two-hour figure-drawing session and so I keep on doing it. 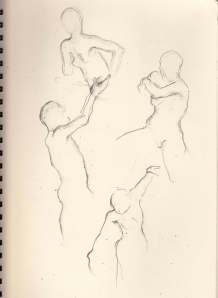 Recent sketches from a life drawing session at the Productive