Lincoln Center is doing its outdoors program right now, where the public can take in dance and music performances for free as long as they are willing to forego air conditioning and sit a few hours to save a place. I was first exposed to the Paul Taylor Dance Company through the Lincoln Center Out of Doors festival and to a lot of great step fraternities and sororities.

The name and premise of Gimp attracted me to this particular performance out of all the festival’s programming: regular and disabled dancers take the stage together to make a statement about beauty and motion. I met a friend an hour and a half before the performance and we were able to pick out primo seats after being told by the house manager that there would be a lot of floor work in the performance so we’d do best not to be sitting right up front.

It was pleasant at first sitting under the trees near the reflecting pool of Hearst Plaza. A woman with Down’s syndrome sat behind us with her family and friends, and when somebody asked her what she wanted to drink, she answered back, “I don’t care as long as it’s alcoholic.” My kind of people. After the woman went to join her friends, we heard somebody else discussing how she charged a client three hundred grand because she would have to pay her own medical insurance. That’s definitely a sphere I don’t participate in. Sometimes I forget how rich dance patrons can be.

Eventually, the seats were all taken, and people in wheelchairs were edged in at the ends of rows, so it was incredibly difficult to catch a breeze. Purple silk scarves draped down from a hook and fluttered in the very slight wind as the first two dancers took the stage. A ponytailed woman, with arms that rival some of our Olympic athletes, slowly moved her torso onstage from a ramp in back of the stage. A male dancer with legs fashioned a swing for her torso, raised her up, and then swung the woman around like a slingshot. I was afraid the silk was going to snap and hurl the woman out into the audience, and she didn’t have legs to break her fall. I could see a million injuries happening, which made me wonder what rehearsals were like. Magically, she did not get dizzy, vomit, or fall. After many other stunts and a swinging kiss, the male dancer lowered her back to the stage and she calmly walked herself off the stage with her hands, as if to say, “And that’s how it’s done.” 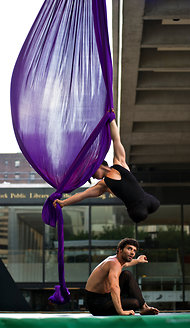 The company’s head Heidi Latsky then came to the stage with five other dancers. They were evenly mixed between disabled and regular dancers, but during the performance, I found my eye drawn to the disabled dancers because their movements were so unique compared to other dance that I have seen. Compared to this, the regular dancers suffered. Their dance and movement were boring in contrast, and I only watched them when their bodies were juxtaposed in some way with the disabled dancers’.

Sweat was beading up on the audience’s faces as the performance progressed, and it seemed overlong with the heat outdoors. People were arriving at Lincoln Center’s Vivian Beaumont Theater for the eight o’ clock performance of War Horse, and it was entertaining to see members of this audience do a double-take as they took a look at the dance performance in progress and then realized, Wait a minute, that guy’s got no hand. Gimp gave both audiences a chance to look without being rude, and in looking to realize that there’s nothing monstrous or disgusting about having a different kind of body. It can be a thing of beauty too.