A few years back when I started making good money from my freelance work, I decided it was time to make the move from my humble laptop to a ginormous desktop system. I figured that it was necessary since I was working on bigger graphic files and not just Microsoft Word anymore. I bought myself a 21.5-inch iMac and had the maximum amount of memory installed with my accountant’s blessing. I named my hard drive Second Brain, but as time went on, I found that it was acting more and more as First Brain.

In the morning, often before I had even made my coffee, my first stop was my computer. I logged in and checked all my e-mails and such to make sure nothing earth-shattering had happened during the night. From there I would make myself breakfast and then watch something on YouTube or just surf while I ate. Then I would get to work. Sometimes I would feel a physical pang when I was separated from my computer for too long. I could lose whole days on that computer between my work, music, online life, and movies without much to demarcate the time of day or even the week. I wasn’t a complete computer potato. I would make sure to get out of the house at least once a day unless I had a killer deadline to make. But I never noticed how much my home life had shrunk until my computer was stolen.

Second Brain hard at work on the night of the first presidential debate.

I’ve been going to a coworking studio pretty regularly since June because it gets me out of the house and somewhat socialized—also, I have a dual-monitor setup there that is so helpful with all of the fact-checking and shifting that I have to do between documents. I came back from the studio last week and went to my computer right off—only it was gone. My printer, my scanner, and my brand-new camera were all there on my desk. It was only my iMac, keyboard, and Magic Mouse that were gone; the thumb drive, digital voice recorder, and iPod cord that had been plugged into the iMac’s USB ports were taken out and lay lifelessly on my desk. I went through my desk drawers and live checks were still there, credit cards, and my checkbook. At first, I thought maybe my sister had borrowed the computer or something, and I waited for her to get home. Once she did, we were able to verify pretty quickly that we had been robbed. I knew I had to call the police, but what number should I call: 911? That seemed so frivolous. A robbery didn’t really rank as an emergency, did it? I dug out my netbook and did a quick google, which suggested that I call the city’s information line: 311.

I did that and the woman who picked up ended up patching me into 911 anyway, so that’s one thing I learned. If you’ve been robbed, call 911. The 911 operator took my address, phone number, and asked me what had been stolen and then said to wait and police officers would respond as soon as they could. I hung up, talked to my sister about it, wrote about it, made something to eat, and talked to my sister about it some more. It was nearing eleven at night, and we had been waiting a couple of hours. I didn’t think the police were going to come until morning and was just getting ready to take a bath when I heard the telltale sound of police radios in the entryway outside our apartment. I opened the door to a short, loudmouthed Ponch type of character and his completely silent sidekick, who was tall and gangly with the shadow of adolescent acne still on his face.

They checked my windows that led to the fire escape, asked about my work and what was stolen, and weirdly enough, complimented me on my driver’s license photo. Then they got a call on the radio about a deranged person on Ocean Parkway and said that they would be back in twenty minutes. They were back in less than that, and while they were gone, Kristi and I joked about getting them to pose for photos as they investigated the crime. When this team came back and were checking out my windows again, our doorbell rang and another cop and his partner entered our apartment. Now, it was starting to look like Law & Order, and the cops started acting like that too. The most senior officer (I assume, since the Ponch character was deferring to him) decided that point of entry was the door to our apartment, though it had been locked. Because I’m a freelance writer/editor type and only the computer was taken, he thought it sounded like “corporate espionage.” There had been tons of other valuables lying around in the open, and he said a thief would just sweep the computer and valuables into a bag and not worry about niceties like disconnecting cords and external hardware. Then he said that this was definitely somebody we knew. 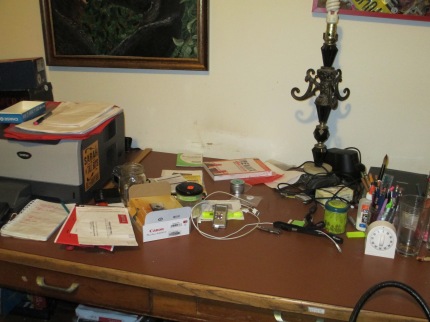 My naked desk after the robbery.

This made me feel awful. The last thing I wanted to do was cycle through all my friends and acquaintances, mentally calculating who the guilty party might be. I was reading Damien Echols’s Life After Death, too, where the author was blamed for a crime because of his Goth tastes and sentenced to death with no evidence because of a prejudiced jury, judge, and so on, which made me really leery of thinking about anybody that way. The police finished up and said not to touch anything on the desk and that a detective would be at our house in the morning.

One response to “I’ve Been Robbed!, Part I”