I went to bed shortly after the police left and didn’t sleep all night. Every creak in the house, ding of a nut on the fire escape—those sounds made me sure the thief was returning. As I tossed and turned, I thought about the last time I was robbed when living in Austin, Texas. We lived in a house at the end of a dead-end street (prime territory for a thief to hit, the police later told us), and it was about the same time of year, I think. The first time the thieves robbed us there, they took my computer and a few CDs. A week later, they came back and cleaned out everything valuable. To add insult to injury, they piled all of our possessions in our roll-away trash can and used that as their get-away vehicle. We were scared after two robberies in a row and got an alarm system for the house that the cats were particularly adept at setting off. That didn’t stop the thieves, though. Periodically we would return to that house and find that the front porch light had been unscrewed and that they had tried to jimmy open a window. They never got back in after the second robbery, but they sure as hell tried. With so many tries, the terror level dialed down, and the robbery attempts just became a nuisance, like gnats. Now, with the new robbery in New York, I’m beginning to believe there’s something in my star chart about this. Something with my Saturn?

The next morning I was up early, early, early, having given up on sleep at about seven, and a good thing, too, since the NYPD’s Evidence Collection Team showed up at eight. These were two young ladies with tightly braided hair. I showed them my desk where everything had been taken out of my computer, but they said these were poor surfaces for fingerprinting. They finally decided to check the front door for prints, and I tried to do some editing while they worked. I couldn’t concentrate. I kept drifting to their conversation, where they gossiped about people at work. After they finished with that, I had to be fingerprinted so they could eliminate my prints. We did this at my now-empty desk, and my cat Ellie (who usually hates women and hisses at them uncontrollably) came right up to this lady with a gun and head butted her, wanting pets. She probably did this to the thief, too. 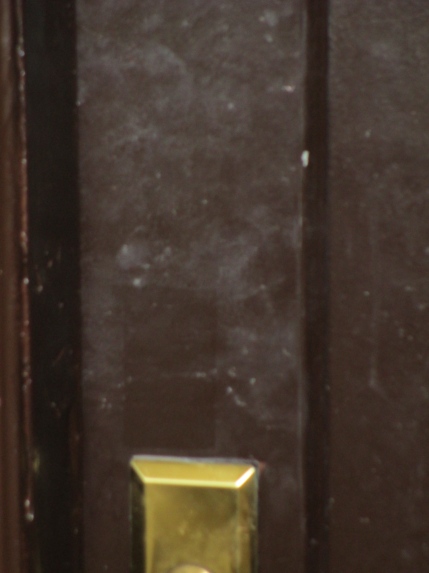 My door after the NYPD Evidence Collection Team lifted prints off it.

Kristi was up by now, and we took a short walk up to Cortelyou Road, a block from our house, meaning to get coffee, and I noticed the sad-face looks we were getting from our neighbors that we happened to run into. Word spreads quickly when you’ve been visited by the police during the night (or during the day, for that matter). I waited for the detective impatiently (I had to pick up a friend at the airport that day), and when he finally came, he gave the lock on my door an appraising glance, then told me how easy it was to pop open with a piece of paper or credit card. He recommended that we have a deadbolt installed, as the ladies of the Evidence Collection Team had done a few hours earlier. He asked about what types of work I did and if I had been working on a particularly newsworthy piece of investigative journalism or something like that. I had to snort at that—unless Alison Bechdel’s next possible graphic memoir counts, well, no. He had me call the building super so he could talk to him about the security cameras in our building and then went through our stairwell, knocking on all apartment doors and questioning our neighbors. I was impressed. We sure didn’t get this kind of service when we lived in Austin.

Friends and family were sweet, calling, texting, and e-mailing to see if there was anything they could do, offering to lend us things that had been stolen or a safe place to stay until we felt more secure in our apartment. One person who was not sweet was our building manager or landlord. I shouldn’t have expected anything different. I have never experienced anything but corruption from the New York City landlords I’ve had to deal with in the ten years I’ve lived here; they come from a long history of this I’ve learned from lectures and tours at the Tenement Museum.

My sister called our building’s management company to report the crime and tell them that the police would be collecting the security camera footage from when the robbery happened. She was passed from person to person and said the guy she was finally patched into must have had a phone that only gets the shit calls, because he was a hard-ass from the start. She asked about the cameras, and he said that they hadn’t been working for three months because somebody had stolen the recording equipment that was in a room in our apartment building. So the security features that the building manager had been touting when we moved into the building were essentially decoys. Kristi asked about getting a deadbolt installed and reported that most of the apartments in our stairwell were equipped with one. He said that we were welcome to have one installed at our expense, but that we must use a licensed locksmith. Kristi brought up the yearly rent increase that we had just been hit with for “luxury items” in our building and said that a deadbolt surely qualified as such. He blathered on about how if she tried to find a comparable apartment in our neighborhood, she would see that our rent was really quite reasonable and even below market value. Kristi was spitting mad by then and hung up with, “So sorry to have interrupted your day.”

So I had our deadbolt installed today by a very understanding locksmith from M&D Locks and Keys, and we had to pay for it out of our pocket. He said he’d just installed another deadbolt in an apartment in our building just the other day. For free, he will come back and take out the deadbolt when we move. That makes me happy; I don’t want our landlord getting anything free off of us. My next-door neighbor told me that they had a similar robbery just last year and only his son’s laptop was taken. So I guess we’re living in a building that’s popular with thieves. 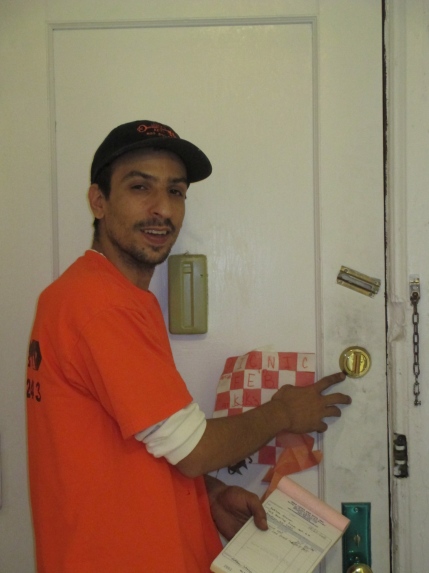 Locksmith from M&D Locks and Keys showing off my new deadbolt.

I still miss my computer, especially the collection of heavy metal videos that I had amassed. I really hope those thieves are enjoying my copy of Judas Priest’s “Breaking the Law.”