When I first moved across the country to live in Portland, Oregon, I couldn’t afford to go back to visit my family for six months, which was probably the longest time we had ever been apart. Though we’ve moved many places far away, we were almost always together as a unit.

During one of the phone conversations leading up to my visit, where my mom quizzed me about what I wanted to eat, she mentioned that she had scheduled a date at the local photography studio to have a family portrait taken.

We hadn’t had one done since I was a teenager, shortly before my grandmother died. She had a terminal illness and knew she was dying but wanted one last photo of our family all together. I was sixteen at the time and so hungover that I had to sit down midway through the photo session because I thought I was going to pass out. (My grandmother asked my mom and dad if there was a possibility that I was pregnant.) My brother Randall and sister Karla were wee—ages six and eight—full of gapped teeth, and my brother had a summer crew cut that was growing out.

Now Karla and Randall were in high school, and my mom said my brother was seriously resisting the family portraits. He was fifteen, had grown his hair out, and dressed like his favorite musician Marilyn Manson, who he had seen in concert multiple times. After getting off the phone with my mom, I told my friend Susan that my brother didn’t want to dress up for family portraits. She came up with the brilliant suggestion of us all wearing Marilyn Manson T-shirts since my brother had so many.

Once I flew home to see my family, I jokingly mentioned this to my mother, and my brother was on fire with this idea. He insisted we do it and my mom picked through the closet full of Halloween costumes and found some wigs to go along with the T-shirts that Randall had selected.

My father didn’t like the idea of the joke photo, and we drove to the photography studio in our good clothes with the Marilyn Manson T-shirts, leopard gloves, and wigs stashed in a bag.

Our first photo was formal with us kids grouped around a sitting Mom and Dad under the bright lights and umbrellas. That didn’t take too long, maybe ten minutes. And then my mom said to our photographer, “Okay, you’re going to think this is weird, but…,” and she laid out what we wanted to do. I think the photographer had been bored before, going by the “Greats,” “Just one more shot,” and so on that she let out, but now she got really excited.

“I know the perfect place—do you mind driving somewhere?—it’ll be like an album cover.”

It was January in Iowa, which means freezing or below, and we found ourselves in front of a half-destroyed building in just our Marilyn Manson T-shirts and other street clothes. My mom and dad both put on wigs and Kristi brought along the serial killer paperback that she was reading as a prop. With leopard gloves dispersed so we could each wear one, we huddled together for warmth while trying to strike band poses. My dad really started getting into it now and cadged a pack of cigarettes off one of us to roll up in his shirtsleeve and look more badass. 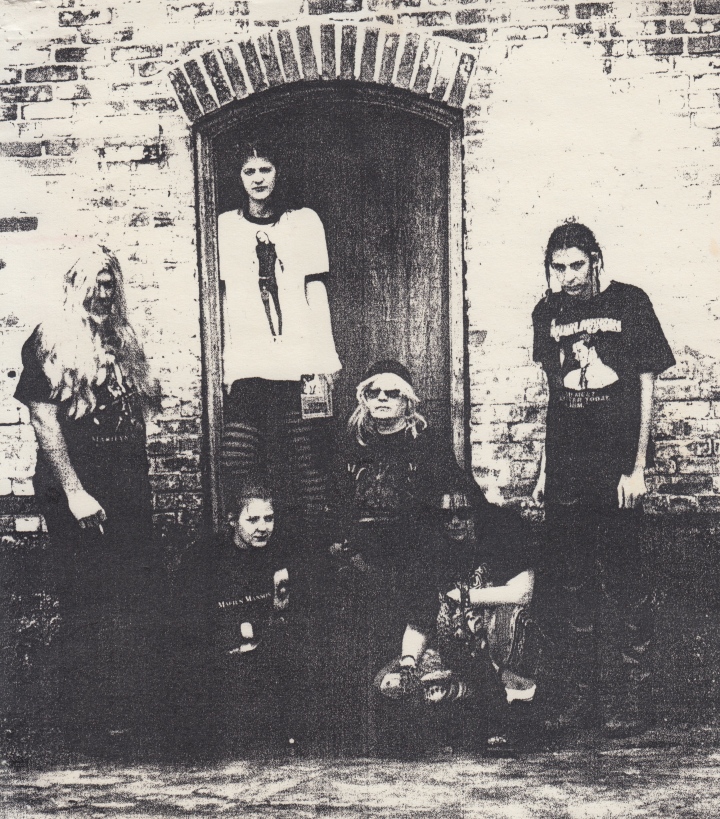 I went back to Portland and forgot all about that photo session until several months later when my mom mailed photocopies of the family portraits to me. I didn’t like the normal ones—I don’t think any of us did. I liked the portraits of us in the Marilyn Manson T-shirts. It seemed more like who we were together—too loud, always late, with a closet full of Halloween that’s too good for just one day a year.